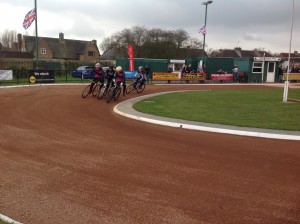 Councillor Phil Bateman said today – ” The announcement that our own cycle speedway legend Mick Aris is to hang his Helmet Gloves and speedway cycle up will surprise some people. After 50 years taking part in the sport as a rider, it will take some getting use to for Wednesfield Aces fans not to see him careering around the track in his own kamikaze style.

But for anyone to give 50 years to such a physically tough sport is indeed phenomenal. I want to place my own tribute to Mick. Its your swashbuckling style that the fans will miss. But for me I think you have earned yourself a bit of a rest! I am sure the sport has not lost you, just the cycle track,  Mick rode in 19 British Team Cup finals and has won 9 of them and also as a manager won two.

Here are some of his achievements: