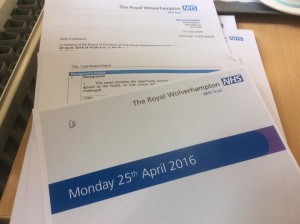 This morning I attended the Royal Wolverhampton Trust Board meeting and the looming Junior Doctors strike tomorrow was discussed.

The Chief Executive reported that 1100 appointments had been hit and 99 inpatients arrangements have had to be cancelled or postponed. The strike is expected to end at 17.00 tomorrow night Tuesday the 26th April. The Board was told that they expected the Junior Doctors to return to immediately the dispute had ended at that time.

The CCG told the Board meeting that they had written to GP’s asking them to be aware of the strike and be prepared to provide additional services.

The Board have clearly got their emergency planning arranged, it’s such a sad situation that the Junior Doctors find themselves in. In a personal capacity I support the stance that the doctors have taken, having been placed into this situation by the Government.