Residents in Rogers Close contacted me about a camp that had ben built with trees and branches with a bed and a bedside lamp placed in it. Evidence shown to the police by residents included the remains of a fire.

There was concern in the neighbourhood of what it was being used for, and the residents called the police. Then they contacted me.

I have been in touch with the City Council and today the city removed the camp.

Hopefully this will be the last we hear of it. I hope that the Police keep a watchful eye on events over this summer. 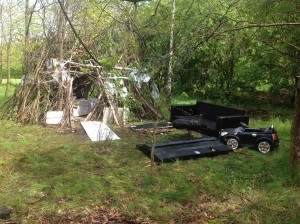