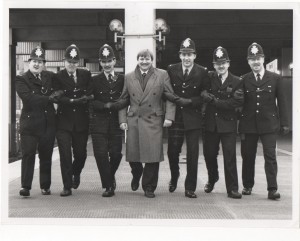 During happier times when there were more police officers, protecting public transport & our community.

This morning I have expressed my concern that violent crime in the West Midlands has increased by 11% and that crime statistics seem to be going in the wrong direction. I have made it very clear that the Government, as well as the Police & Crime Commissioner should be very concerned that the police resources are not matching the requirements of the job.

I do hope that the people of Wednesfield North will support me and the views I have expressed.